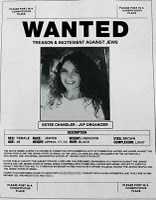 New York Times Profile of Jewish Voice for Peace: http://www.nytimes.com/2011/02/04/us/04bcactivists.html?_r=1Los Angeles area Jewish peace activist targeted at home for work against Israeli occupation: Part of pattern of escalating harassment and attacks against Jewish peace advocates[February 4, 2011, Los Angeles]  On Wednesday February 2, Jewish Voice for Peace Los Angeles chapter leader Estee Chandler discovered a “WANTED for treason and incitement against Jews” poster on her front porch. The photo featured her picture, workplace, and most disturbingly, names of nieces and nephew (see attached) as well as charges about “anti-Jewish” activity. The poster specifically targeted her for her work with Jewish Voice for Peace, a national organization with 27 chapters, dedicated to ending Israel’s occupation and promoting a just US foreign policy that recognizes the rights of both Israelis and Palestinians.Chandler had previously been in the media as part of a national effort to get the retirement fund giant, TIAA-CREF, to divest from companies that profit form the Israeli occupation.The creators of the poster remain unknown, though the police are actively involved.This act of intimidation at the home of a peace activist follows similar high profile campaigns of harassment by settler groups  targeting Jewish activists like Tikkun’s Rabbi Michael Lerner, or Rabbis for Humans Rights’Rabbi Arik Ascherman and New Israel Fund president Noami Chazan in Israel. It is also part of an alarming escalation of threats and attacks on Jewish Voice for Peace members  here in the United (Links to video or photographs):
Police reports have been made in all cases Estee Chandler, Los Angeles chapter leader Jewish Voice for Peace: ” I was forewarned about extremists when I first decided to start a Jewish Voice for Peace chapter here in my hometown of Los Angeles.  I went into it with my eyes open. While I didn’t think anything would happen this soon, i cant say it wasn’t something I didn’t anticipate. Ultimately I think these people really are cowards, and not really to be feared.We are the silent majority of American Jews and its time for us to stop being silent. if we raise our voices a fraction of the level of these people- we will become the message, too many people who are with us  are afraid. ultimately nonviolence is the only thing that has ever won out.”Rabbi Haim Dov Beliak, haimbeliak@gmail.com, Rabbinic Council of Jewish Voice for Peace, leader of Jewish adult study center www.HaMifgash.org as well as various justice related projects in Southern California such as www.stopmoskowtiz.org.: “The resort to vilification, demonizing, and other such tactics against Estee Chandler and other Jewish Voice for Peace members must be identified as acts of desecration, both in a secular sense and in the religious sense. The right to hold different views in peace and without fear, is at the heart of democracy’s promised and cherished freedoms. The “wanted poster” is a translation in English idiom of the villainy unleashed by the violence prone settler movement in Israel and now, their supporters in the United States.  Jews who speak for peace and reconciliation are not traitors to their people rather they are its Prophets and descendants of the way of the holy house of Aaron: “seeking peace and pursuing it.” The charge of “traitor” and the designation of “race” as Jewish on the poster bespeak the ideas of people who spread fear as their only tool.Available for comment: Elissa Barrett, Executive Director of Los Angeles Progressive Jewish Alliance ebarrett@pjalliance.org     Commento: massima solidarietà..in attesa che le solite organizzazioni pronte a spaccare il capello in quattro per le usuali litanie sull’antisemitismo, prendano posizioni dinanzi a questo grave  atto di antisemitismo
Frammenti Vocali in MO: Israele e Palestina 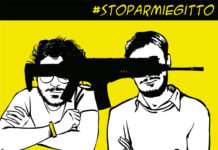 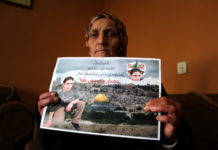 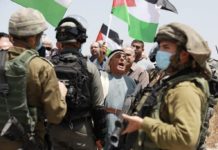 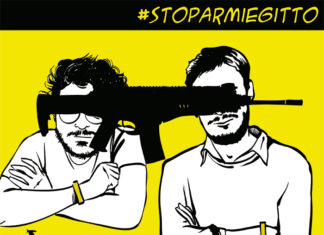