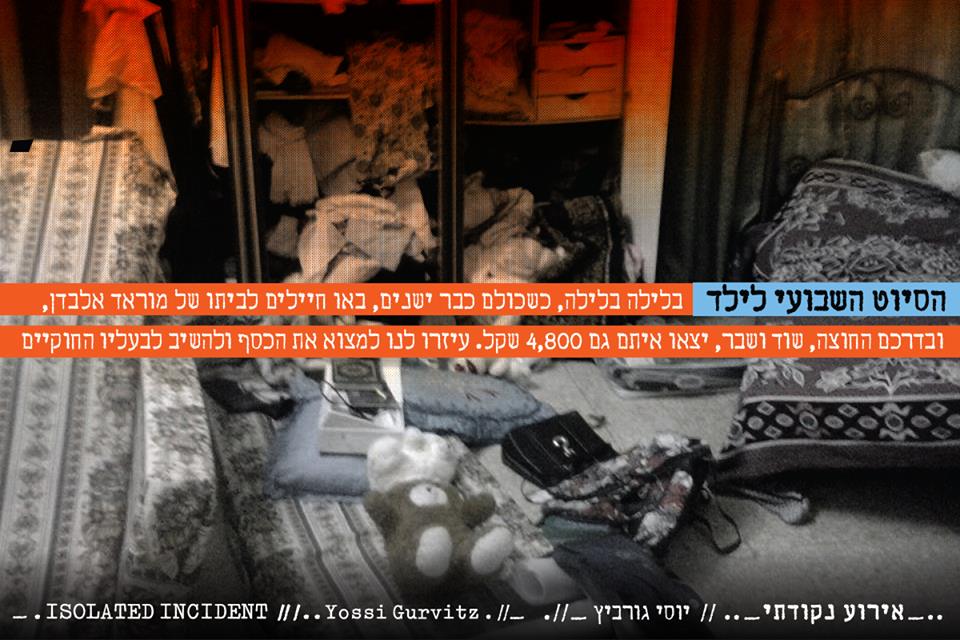 One of the things the IDF hardly ever talks of is looting. In the IDF’s early days, it was considered to be a grave felony. Ben Gurion dismissed a valued officer, Uri Ben Ari, following the 1956 Sinai War, after the colonel’s driver – not the colonel himself – was caught with a looted sack of sugar. In another case during that war, another officer – Aryeh Biro – threatened a fellow officer, whom he caught looting, with shooting on the spot. Journalist Nahum Barnea once documented a paratrooper captain during the First Lebanon War, ordering his soldiers to turn over their loot, or he would severely punish them; and then burned the booty before their eyes.

But that was a long time ago, when the IDF still fought regular armies, not an occupied population. During the occupation years there were quite a few reports of looting, and the IDF’s latest large operation in the West Bank, Operation Brother’s Keeper, supplied us with a series of such reports. We recently reported a case of looting from Aqraba; here is a story from Tqoa.

In the town of Tqoa, situated to the south-east of Bethlehem, lives Murad Ayish Khamdan Albaden. He is a tax collector for the municipality. At the end of June, early in the morning, Albaden was woken up by strong knocking on his door. A large number of soldiers was at the door, accompanied by several police officers, out of uniform but with police hats on.

The soldiers orderd Albaden to concentrate the family members, including three children, in one room, and then began causing massive damage to the house. They carried out a brutal search, which scared Albaden’s children, breaking furniture, smashing closets, breaking doors. The undersigned once saw, during his military service, a soldier smashing a transparent glass table, saying later with a smile that he had been searching it. Such a search was carried out in Albaden’s house. A warrantless search, of course, a search without documentation of the search, a “search” which is a sort of intimidation, or perhaps, terrorism.

But that’s not the story. There are far too many similar stories and Albaden didn’t even complain about the damage. During the search, Albaden was asked to present all the money he had in the center of the living room. There were 4,800 NIS there, 3,000 of which were tax funds Albaden had collected as part of his job (he has the receipts he gave for them), but was yet to turn over to the municipality, and 1,800 of his own money. One of the men with the police hats took the money, but adamantly refused to give Albaden a receipt, which he is obliged by law to do during a confiscation. The man with the hat claimed he didn’t have the proper form with him. Albaden asked for a handwritten receipt; the man with the hat refused, saying Albaden should go to the Etzion DCO.

Here we should explain the difference between confiscation and looting. Confiscation is a legal act, but it must be attended with a document affirming that and documenting the fact that the authorities have seized property. The official IDF magazine,Ba’Makhane, wrote a few days ago that the IDF confiscated some 1.2 million NIS during Operation Brother’s Keeper.

But taking property without documentation is not confiscation. There is no documentation of the seized property and in practice, no way of knowing that it ended up with the authorities and not the person who seized it. The fact that the man with the hat refused to give Albaden a receipt, or any other document, raises grave concern that what happened here was not a confiscation but looting.

Such concerns becomes stronger when we learn what happened next. Albaden went to the police station, where they said that had no knowledge of the case and no documentation, and sent him to the Etzion DCO. There, a policeman laughed in his face and sent him back to the police.

In the meantime, 4,800 NIS – 3,000 of them, again, belonging to the residents of Tqoa, and under Albaden’s trust – are gone. The reasonable suspicion is that they were looted.

Israelis have become accustomed to defending just about anything their occupation forces do. They can, and sometimes do, defend the shooting of unarmed children, because “you don’t know what he did before that.” Looting has no operational excuse. The looter does not protect the State of Israel; he corrupts it.

The Israeli media refrained from reporting the cases of looting during the operation, even though they are known to quite a few people. This, again, is not something that can be excused away. What you can’t excuse, you drag under the carpet. If you, too,  think that looting by the security forces is something to be discussed, to be openly condemned, share this post.