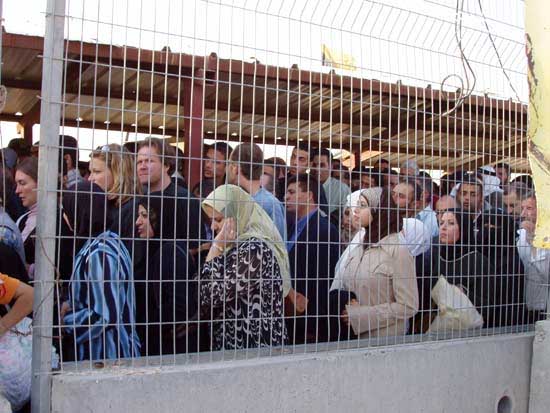 Today I was ashamed, as a physician and as an Israeli. I joined some friends from Machsomwatch as an onlooker at the checkpoint Qalandia, north of Jerusalem on the road to Ramallah. This is the busiest crossing of the Green Line, where during rush hour thousands of persons pass. The passages are narrow, the crush is indescribable, the soldiers are inert and unmoved behind their armored glass windows. In order to experience some of this feeling, outside the rush hour crowd, we went through this route. With strong misgivings I joined, fearing my associations with cattle slaughterhouses and worse. From afar we heard the siren of an ambulance approaching and one of the experienced machsom-ladies said, come, this you must see. Mind you, I came as an interested onlooker to see how Palestinians are herded like cattle, not in any medical capacity. So this column will acquire an unplanned para-medical content.
Palestinian patients who don`t find adequate medical treatment for their ills on the West Bank can obtain permission, in difficult medical problems, to seek treatment in Eastern Jerusalem hospitals that are usually better equipped. Very complicated cases may even be allowed to enter Israel proper to seek treatment in an Israeli hospital. A Palestinian ambulance brings the patient to the checkpoint where he is transferred, back to back, to an Israeli ambulance to travel to his destination. The Palestinian ambulance may enter the control compound only when its Israeli counterpart is waiting physically at the other side of the checkpoint. Only then do transfer formalities begin, and not a moment earlier.
The first case concerned a 16 year old boy from Ramallah who had an accident where some of his dorsal vertebrae were crushed. For medical reasons he was to be treated at Mukasset hospital in Eastern Jerusalem. After a painful and bumpy ride he arrived at the checkpoint Qalandia at 13:00, where the other ambulance was waiting, as is appropriate. It appeared that some very relevant papers of the patient were not in order, and this had to be straightened out in Ramallah. So back to Ramallah in the Palestinian ambulance.
Here is the place to make a short excursion into the intricacies of the rules and regulations of the occupation. The young patient appeared to be `manua` (meaning he was proscribed, and therefore could not enter Israel. This label is easily affixed to any Palestinian who is suspected of harboring anti-Israeli sentiments, although never having been sentenced, but possibly like in his youth having thrown stones at soldiers, or just having been fingered, thus getting onto one of the black lists). It is not easy to lose this label.
The matter had been solved by the appropriate authorities (meaning the secret service) in Ramallah before his departure, according to a relative who was waiting for the patient next to the ambulance on the Israeli side. But apparently not well enough. So the patient was shipped back to Ramallah to straighten out things. The patient returned to Qalandia where he arrived at 17:00. Now new bureaucratic problems arose, causing another delay of one hour at the checkpoint. Luckily, these wrinkles could be straightened out at Qalandia, and finally the patient was transferred in a painful maneuver into the Israeli ambulance and start on his way to Mukasset. The driver of the ambulance told us that this case had progressed rather speedily, and that it could be far worse.
While we were waiting for the resolution of the first case, another Israeli ambulance entered the compound. This driver told us that a very sick man, 26 years old, with infusions, a blood transfusion and on artificial respiration was on his way from Nablus in order to be transferred to Hadassah hospital in Jerusalem. That he was warned that the patient might not live under the circumstances. This really was a matter of the utmost urgency. We clearly saw the Palestinian ambulance entering the other side of the compound, with wailing siren, and thus we could time the procedures exactly. Also here a delay of half an hour occurred. Checking a normal car takes a few minutes at most. Ordinary soldiers are in charge here, and they decide supreme. Who is sick or just simulating. And most important, all bureaucratic requirements must be fulfilled to the last dotted i.
In the past attempts have been made to streamline these life-saving transfers, so we were told, but security precedes human life and a smooth execution of the new rules has not been implemented.
I stood by gnashing my teeth, and wanted to speed up matters, but I was warned under no circumstances to cross the line to talk to the soldiers in charge, because the soldiers are stressed and their fingers are light on the trigger.
When the ambulance finally arrived at the meeting point, it was clear to all that this was a very sick person. With a lot of tugging and pulling the patient with all his tubes and apparatus was transferred to the Israeli ambulance, and he could continue his journey. All this under close supervision of two soldiers with their weapons at the ready, who shouted at us not to photograph.
This is the inhuman face of the occupation. This situation must be addressed as soon as possible, and we should enlist all the help we can get. 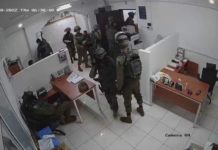 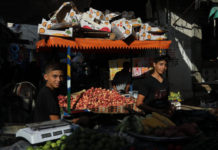 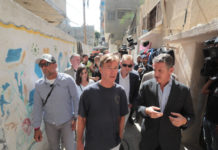