bocchescucite
Home Primo Piano From a hole in the Wall to home demolitions in the Negev:...

This week: A hole in the wall, protests against conscription, house demolitions in Jerusalem and the Negev, price tagging Women of the Wall, masked protesters in Tel Aviv and the West Bank, and demonstrations against occupation and settlements. 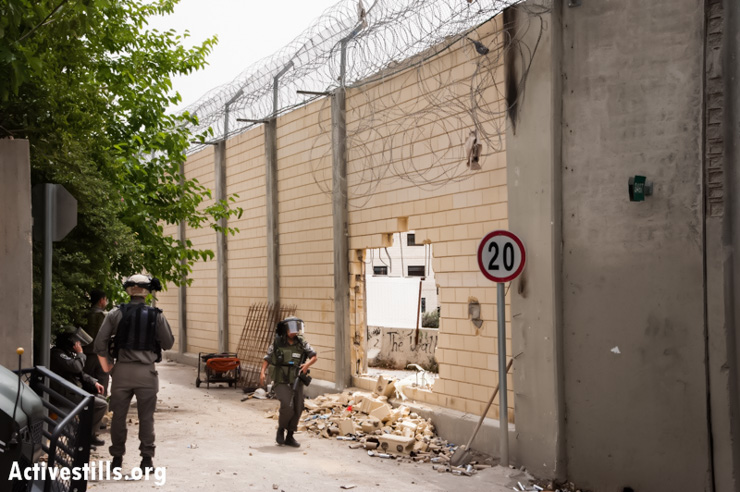 Israeli border police guard the Separation Wall between the East Jerusalem neighborhood of Ras Al ‘Amud and the West Bank town of Abu Dis, May 19, 2013, after Palestinian protesters broke a large hole through it during a demonstration two days previous. (Photo by: Ryan Rodrick Beiler/Activestills.org) 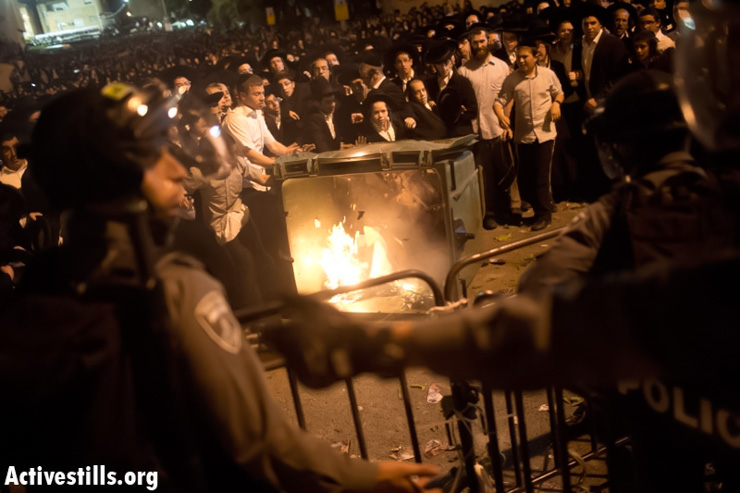 Ultra-orthodox Jews clash with police in front of the main army recruitment office in Jerusalem on May 16, 2013, during a demonstration against any government policy obliging them to undergo military service. During clashes, the police arrested 10 protesters. (Photo by: Oren Ziv/ Activestills.org) 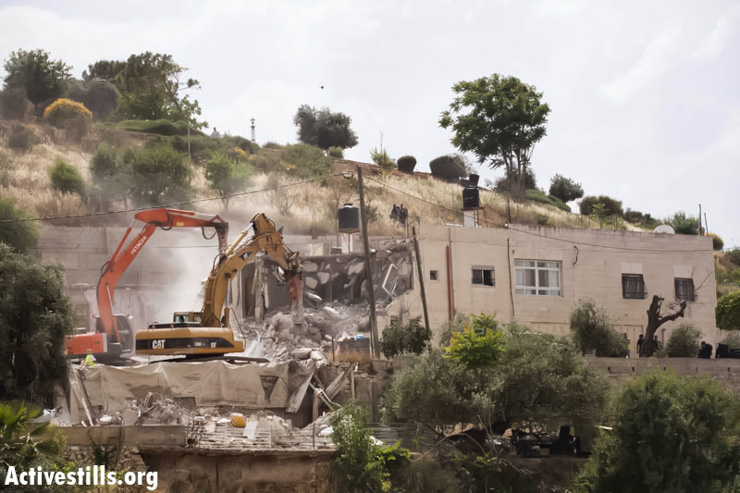 Bulldozers demolish a residential home in the Jabal Mukabbir neighborhood in East Jerusalem, May 21, 2013. The home was demolished on the grounds that it was built without a legal permit. The planning policy in East Jerusalem since its illegal annexation in 1967 is affected by political considerations and systematic discrimination against the Palestinians living there. While extensive building and budget allocations have been the rule in Jewish neighborhoods, the Israeli government has choked development and building for the Palestinian population. (Photo by guest photographer: Tali Mayer/Activestills.org) 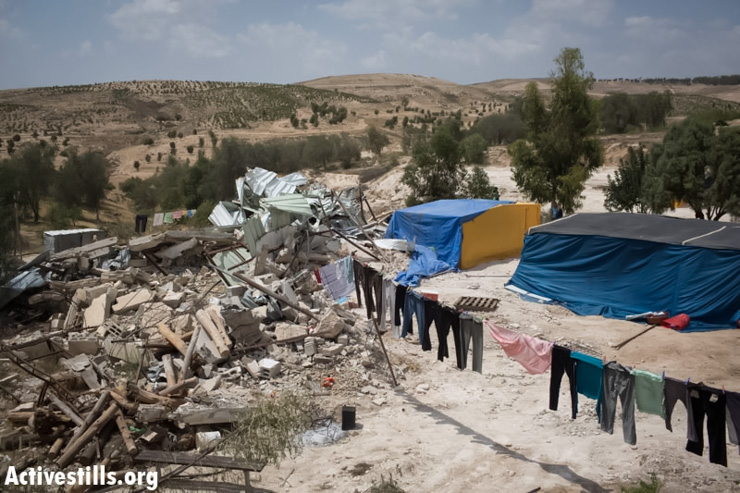 The “unrecognized” Bedouin village of Atir, May 21, 2013. On May 16, hundreds of Israeli policemen surrounded the village completely and demolished 15 structures. Residents of the village have built temporary tents to replace their demolished homes. (Photo by: Oren Ziv/Activestills.org) 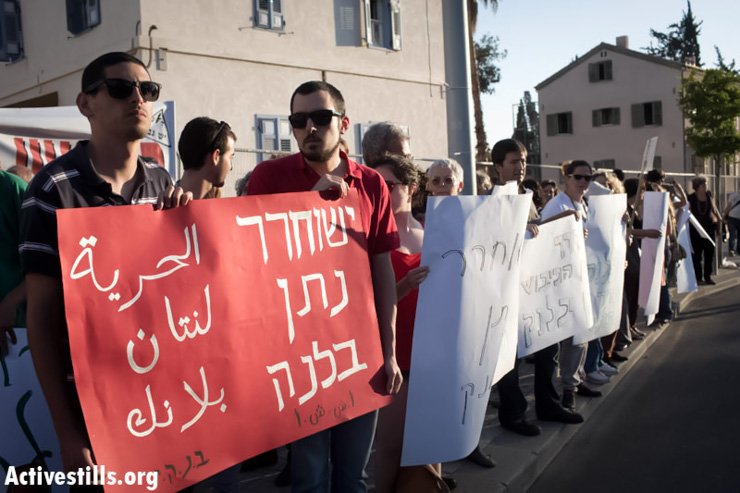 Israeli activists protest outside the ministry of defense in center Tel Aviv, calling for the release of conscientious objector, Natan Blank, who is in Military Prison Number 6, May 21. 2013. Blank has been imprisoned for 150 days for refusing to serve in the Israeli army. For 10 times he arrived at the induction center and declared his refusal to serve as he is opposed to the occupation. He was immediately jailed for several weeks each time. (Photo by: Activestills.org) 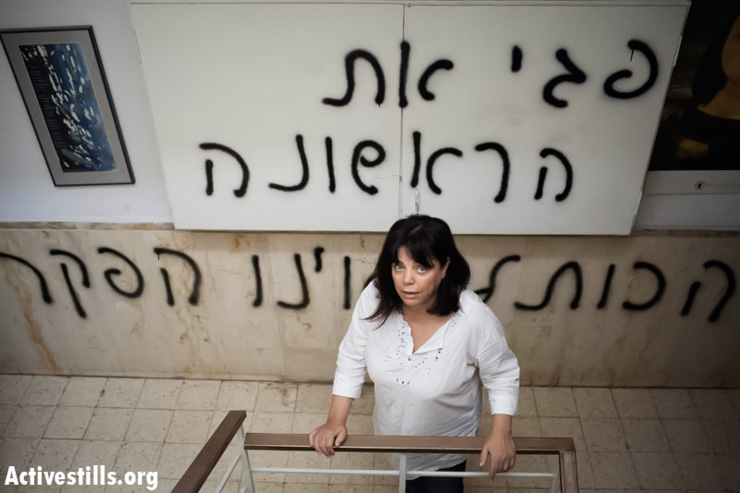 Peggy Cidor, one of the leaders of the liberal Jewish religious group ‘Women of the Wall’ stands in the stairwell leading to her apartment after vandals spray-painted slogans against her and the activity of the group which read in Hebrew, “Peggy you are the first”, on May 20, 2013, Jerusalem. (Photo by guest photographer: Tali Mayer/Activestills.org) 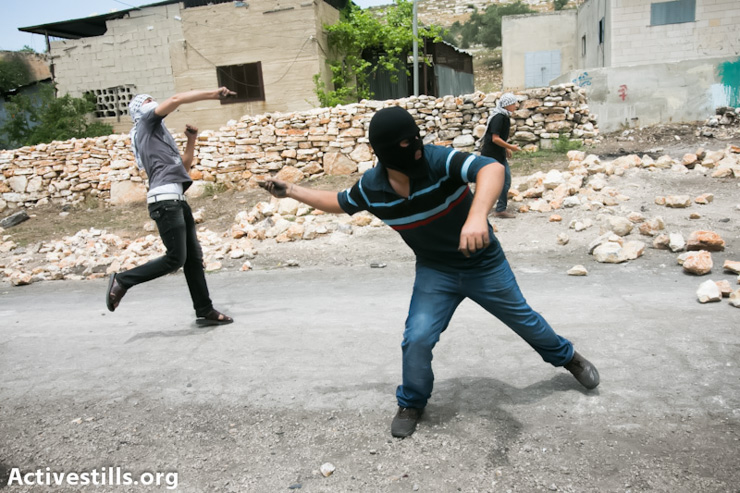 A youth throws stones at an army bulldozer during the weekly demonstration in Kfer Qaddum, a West Bank village located east of Qalqiliya, May 17, 2013. There have been regular demonstrations in Kfer Qaddum since July 2011, protesting the blocking of the main road east of the village which used to link it to Nablus. (Photo by: Yotam Ronen/Activestills.org)

A Palestinian woman sits down in front of Israeli soldiers during a demonstration against the occupation in the West Bank village of Nabi Saleh, May 17, 2013. (Photo by: Anne Paq/Activestills.org) 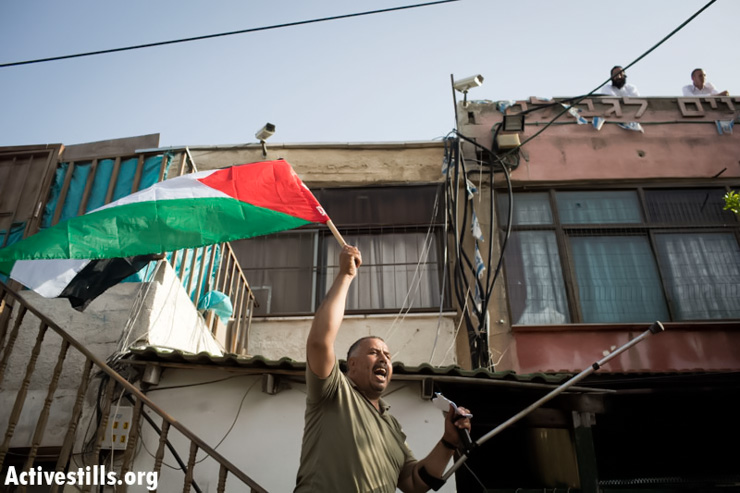 A Palestinian activist waves a flag in front of a home taken over by Israeli settlers in the Sheikh Jarrah neighborhood of East Jerusalem, May 17, 2013. (Photo by: Oren Ziv/Activestills.org) 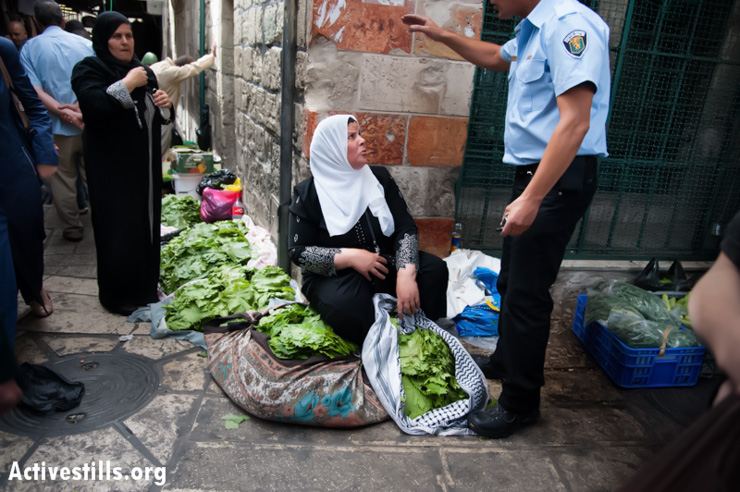 An Israeli policeman orders a Palestinian woman to leave the street where she is selling produce in the Old City near Damascus Gate, East Jerusalem, May 18, 2013. Though effectively annexed by Israel after the War of 1967, the international community considers East Jerusalem, including the Old City, to be part of the occupied Palestinian territories. (Photo by: Ryan Rodrick Beiler/Activestills.org)