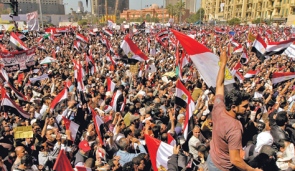 A demonstration in Tahrir Square on Friday − without the flags of different political streams.

The author is reminded that the Palestinians are under occupation when almost all Egyptians refuse to meet with her because she writes for an Israeli newspaper.

While In Cairo, I finally found out that Israel is an occupying state. This is thanks to all those people who refused to meet with an Israeli journalist. In this way, my three-week stay in revolutionary Cairo turned into an adventure of seek bypass routes, and not without a great deal of professional frustration.

Some refused to meet on principle; they can be divided into two categories. The first group is comprised of those who reject the very existence of the State of Israel and believe that meeting with an Israeli (Jewish ) citizen signifies some kind of acceptance of or consent to its existence. When Israel remains something abstract and does not consist of people who are real and diverse, it’s easier to view it as a Crusader castle deserving of only one fate.

A telephone call with someone who I believe belongs to this first category, went something like this: Me: “Hello, I received your telephone number from the journalist, X.” He: “Please, I’m at your disposal.” Me: “My name is so and so, I have been living in Ramallah for the past X years and I write for the newspaper Haaretz.” He: “No, I don’t deal with the Zionist entity.”

He was polite but determined. And he is not a member of the Muslim Brotherhood. (Some members of the latter were surprised by the very fact that I’d asked a third party to set up a meeting between us. ) He obviously could not have guessed that his name would eventually appear in full on these pages, in a translation of an article written by Bernard Henri-Levy.

Of course, the glass also has a full half – a Jew is boycotted only if he is of the “entity-an” species. I wonder whether an Egyptian would be permitted to be interviewed by a Palestinian journalist who is a citizen of Israel and writes for Haaretz. Or does the very fact that he writes for this paper make him “entity-an”?

The people of the second category object to any kind of normalized relations with Israelis in order for them to understand that the Egyptians do not accept Israel’s belligerent presence in the region as self-evident. The emphasis here is on “belligerent,” not “presence.” They think that by rejecting any contact with Israeli citizens, the latter will realize that their rule over the Palestinians – and everything that entails – is not normal: land grabs; the siege on Gaza; shelling, killing and injuring civilians; the refusal to acknowledge responsibility for the existence of the Palestinian refugees.

This position implies self-imposed restriction on entering the Holy Land through any border crossing controlled by Israel. Thus the boycott actually targets Palestinians, too. After 2005, and particularly after 2007, entry into Gaza became “kosher,” leaving the crossing restrictions only to the decision of the Egyptian authorities. The boycott therefore generates a theoretical knowledge of the situation over here. But the occupation policy is comprised of endless intolerable details. If the Egyptians were aware of them, I believe their explanations about the built-in obscenity would have only improved.

Only a visit to the actual place reveals just how abnormal the situation is. For example, a Palestinian resident of Bethlehem is not allowed to travel to Jerusalem – a distance of five minutes away; a farmer from Hebron is prohibited from digging a cistern; a woman from the West Bank can only visit her family in Gaza if someone dies.

The Palestinians hunger for personal, cultural and other ties with Arabs from neighboring countries. Not all of the Palestinians can afford to travel abroad. Some feel they have become an indirect target of the boycott of Israel by Egyptian artists, intellectuals, writers and academics; and some of them support this boycott even if they suffer from it. The debate over whether the boycott of any Israeli would lead Israelis to comprehend the belligerence of their state does not fit within the inches allotted to this column.

The strength of rumors

A third group of Egyptians who refused to meet me are those whom, under other circumstances, would not have declined my request. Do not be mistaken: their bellies are full with contempt of Israel’s policies, and they do not approve of normalizing relations with Israel as long as it adheres to its policies.

In the past, their anti-normalization stand excluded the exchange of information and opinions, and allowed for encounters with certain Israelis. (I am grateful to those who did agree to meet and be interviewed, whether or not on condition of anonymity. )

Right from the first days of the uprising, deposed President Hosni Mubarak and his aides tried to incriminate it by claiming that foreign elements – such as Hamas, Iran, Israel, the West – were meddling. This sharpened everyone’s sense of caution. Of the flags flying in the square, none belonged to any particular political currents: neither red nor green. Millions of people participated in the formulation of an unwritten instruction: We will not give the hated regime any pretext to present the revolution as the work of non-Egyptian elements.

Everyone is aware of how destructive rumors and fabricated stories can be, no matter what their source. Those who are partner to the new political formations which are mushrooming these days are afraid of what future political rivals may say – that they favor normalization, they they are breaking the boycott, that they do not oppose the Israeli occupation. The proof? They met with so-and-so.

To my surprise, someone suggested on the phone that we meet at a gathering of workers, whose place in this revolution has been largely overlooked by the Western media. I was delighted, but I had to confirm that he knew exactly who I was. When he did, I heard a note of panic in his voice. He apologized, said it was nothing personal, but that the situation was very sensitive. I understood. I’m the last person who would want the Egyptian workers’ movement to be accused of normalizing the occupation.

The workers’ movement has a much more urgent mission: to explain that the workers cannot allow themselves the luxury of deferring their demands. After all, a monthly wage of 280 Egyptian pounds ($47.50 ) or even 430 or 1,100 pounds, is just not normal. 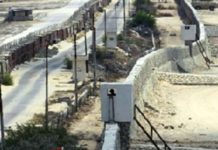 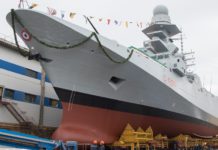 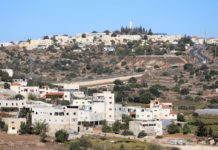 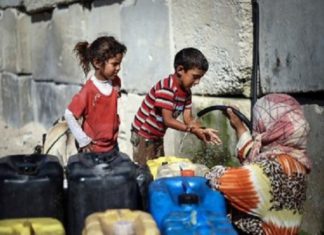