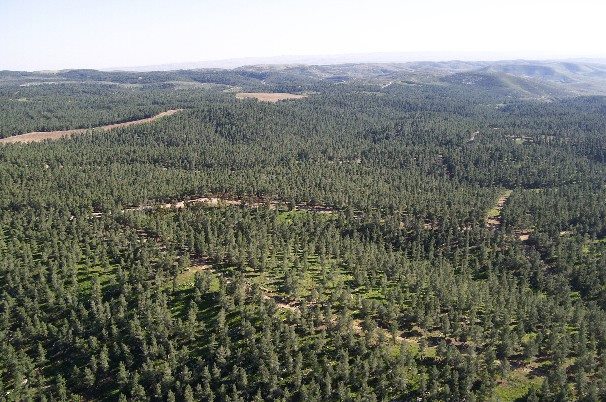 Ethnic Cleansing by All Means: The real Israeli ‘peace’ policy

Pine trees in the Yatir Forest which is being used to displace the Bedouin residents of the unrecognized village of Atir. The original caption on the photo from the website israeltoday.co.il read, “Since the formation of the State of Israel, tree planters have been busy creating forests in the holy land, which was a barren wasteland for centuries.”

The pine trees in Palestine appeared with the establishment of the state of Israel. The pine is generally a European species which before the 20th century was not seen in the Middle East. It was brought to Palestine by the Zionist settlers for two main reasons.  First, it gave the new Jewish settlers the feeling that the place they had migrated to was somehow part of Europe. And if Palestine were to be ‘Europeanized’ in such a manner it would also be ‘civilized’ — the inferior local population would be replaced by a superior one. Thus Zionism was not just a redemption of an ancient land, it was also the revitalization of what in their eyes was an Arabian desert both ecologically and culturally.

The second reason for their import was more practical; they were brought to cover up the ethnic cleansing of Palestine that took place in 1947-48 and produced the Palestinian Catastrophe, the Nakba. The fast-growing pine was widely used to create Israeli national and recreational parks to hide the ruins of destroyed Palestinian villages and neighborhoods which had been evicted by force in 1948.

These forests were presented later on as Israel’s ‘green lungs’ forming together an ecological carpet covering a once barren land. The largest of these ‘lungs’ is the Mount Carmel National Park near Haifa; one of the early projects which attempted to erase the Palestinian life and society that existed there for centuries. This forest stretches over notable villages such as Ijzim, Umm al-Zinat and Khubbaza which have disappeared and are no longer to be found on any map.

This method did not stop in 1948.  When Israel occupied the West Bank and Jerusalem in 1967 pine trees again were planted to cover the new wave of destroyed villages; Imwas, Yalo and Beit Nouba, in the Latrun Valley near Jerusalem. In their stead the ‘green lung’ of Canada Park appeared as a recreational ground hiding the inhumanity of the villages’ depopulation.

Covering ethnic cleansing with pine trees is probably the most cynical method employed by Israel in its quest to take over as much of Palestine as possible with as few Palestinians in it as possible.  Like all the other means, which will be described here, they can be found at every historical juncture since Zionism appeared on the land of Palestine.

Another means used in 1948 and in 1967 was renaming Palestinian villages as Jewish settlements –  more often than not by appropriating the Arabic name of a destroyed Palestine community for the new settlement. In 1949 a naming committee facilitated transforming the destroyed villages of 1948 by Hebrewizing their Arabic names and thus the Palestinian village of Lubya became Kibbutz Lavi and the Palestinian city of Asqalan became the Israeli city of Ashkelon. After the 1967 occupation, the settlement of Tekoa was built next to the West Bank village of Tuqu’ and on its land.

The principal means however were not trees or renaming –  it was, and still is, colonization. For this effort to succeed the illegal 19th century method has to perpetually be accepted and approved by Israeli Jewish society, even in 2014.

Israeli colonialist expansion into the West Bank is viewed by mainstream Israelis as normal and necessary. For most it is a historical right and for the rest it is justified as accommodating a natural population growth in the existing Jewish settlements. In effect the colonization of the West Bank has annexed large parts of the territory to Israel (regardless of any prospective peace settlement in the future). Palestinians in the vicinity of settlements are subjected to other means of ethnic cleansing and the further expropriation of their land, including besiegement with wires, fences, walls, gates and imprisonment within their own localities.

Thus ethnic cleansing enables Israel the human as well as the geographical landscapes of Palestine. Control over the landscape is not limited to 1948 Palestine or 1967 West Bank, it is an essential part of the Zionist project today.  Where the land is still Palestinian inside the green line, where Palestinians who survived the Nakba live, it is confined by a spatial master plan that disallows any building permits or expansion of the areas accorded to the indigenous people who are officially citizens of Israel.

The thrust of the ecological and spatial takeover has changed over the years; these days it is managed by right-wing Israeli political forces. In the past, it was the Zionist left that established facts on the ground – without publicly announcing the real intentions behind them while cloaking their actions with a legal discourse that purposely confused Israeli law, international law, Jordanian law and Ottoman law, to justify expropriation of land as ‘state land’.

These colonialist facts were established on the ground before and during the so called “peace process” that commenced in 1993. The Palestinian negotiators were asked to legitimize them through political agreements, which so far they have refused to do. The current right-wing Israeli political leadership declares publicly its desire to cover the West Bank with what it calls ‘settlements’, which are actually 19th century colonies. They do not even seek, as their predecessors did, any Palestinian agreement and continue with their unilateral policies.

This policy of ethnic cleansing, by different means since 1948, is a consensual issue in Israel and thus leaves very little hope for peace and reconciliation. The current Israeli left, the self-acclaimed ‘peace bloc’, is willing to oppose new settlements but refuses to acknowledge the historical injustice inflicted on Palestinians in 1948 and denies displaced Palestinians their right to return to their homes and their homeland.  Most of its members also wish Palestinians would consent to the annexation of so-called ‘settlement blocs’, large swaths of illegal Jewish colonies in different parts of the West Bank, to Israel.

The refusal to acknowledge the Right of Return and the wish to retain the settlement blocs is intended to keep Israel a Jewish state over large parts of historical Palestine while leaving Palestinians limited sovereignty over what remains of the country. These remains can become the State of Palestine without any real sovereignty and viability while the Palestinians inside Israel would have to accept their second degree citizenship as a fact of life under a final agreement.

The strategy of ethnic cleansing is marketed differently domestically and externally. It is based on the need to ‘preserve Jewish identity’ to the Israeli public and abroad as ‘Israel’s need for security’. Taken together these pretexts or excuses form the Israeli consensus behind the ethnic cleansing strategy.

These concepts are used widely across the political spectrum in Israel and provide the framework for the Israeli ‘national consensus’.  They also underpin the political instruments which deny the rights of the indigenous people of Palestine and further the goal of maintaining a Jewish majority.

Another means of ethnic cleansing is the segregation wall surrounding major Palestinian communities in the West Bank combined with Israel’s control of local and international border crossings. All these means allow Israel to gain maximum control over the Palestinian population with minimum cost. At the same time Israeli settlers are connected with major Israeli cities through a developed and modern system of highways and bypasses. These roads were paved in such a way as not to ‘upset’ the settler commuters with the sight of Palestinian villages or towns and many of them go through the day without catching sight of the imprisoned Palestinians near them.

This desire to ‘not see’ Palestinians is evident when one browses the websites of Israeli real estate companies. It is difficult to find any references to the Palestinian presence in any of the properties or neighborhoods offered for sale.

The main attraction mentioned in these ads is that those areas have ‘no security threat’ or that they are situated ‘not far from’ a major Israeli city.  This practice of assuring, explicitly or implicitly, prospective buyers that the new property will not have Arabs in its vicinity now or in the future, is not restricted to ads in the West Bank.  Inside Israel in areas such as Safad, where Palestinian Israeli students go to university, there is an explicit campaign to ensure they cannot get any flats in the town. And websites declare publicly they sell only for Jews by pointing out that their property belongs to the Jewish National Fund. This excuse is also employed in mixed cities such as Haifa and Jaffa to attract Jewish buyers to ‘only Jewish’ areas.

Also, the anti-repatriation policy against Palestinian refugees is ethnic cleansing by other means. Their inability to return has nothing to do with questions of absorption or the country’s capacity, but with their nationality. Israel is a country where citizenship has no relation to a person’s nationality. Judaism is a religion which became a nation though the Zionist project which produced Israel.  Consequently Jewish-Israelis belong to the Jewish nation, and Arab-Palestinians are minorities. Any Jew in the world can become a citizen of Israel while a Palestinian who knows no other home is a resident with unequal rights or no citizenship at all.

What ethnic cleansing enabled Israelis to do was forget about the Palestinians imprisoned behind all the means their state implemented to take the land and ‘solve’ the demographic problem. Even when, in desperation, the people of Gaza resisted the worst of these devices it did not affect most Israelis. The carnage which was broadcast all over the world did not seem to move the vast majority of Israelis who continued, despite what Israeli propaganda attempted to portray, their normal life as they had done before. Life may have been disrupted for a few weeks in certain parts of Israel, but this was not enough to alert Israeli society to the crimes committed in their name.

The problem with Israel thus is not a policy here or there, but its overall strategy that has not changed since 1948 and is as cruel, and far more effective, than some of the ethnic cleansers now in action elsewhere in the  Middle East and in the world as a whole.