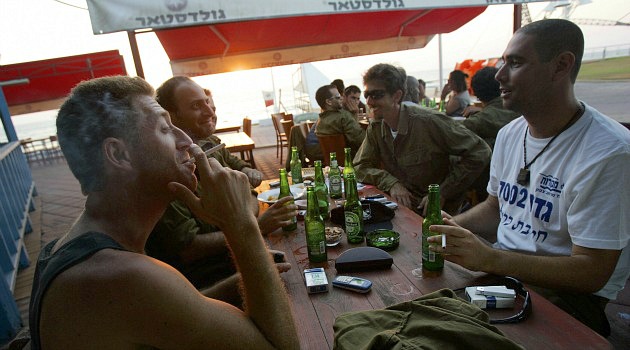 GETTY IMAGES
Life’s a Beach: With the sun and cafes, It can be easy to forget about the occupation and conflict in Israel. That’s not necessarily a good thing.

Israelis Are Too Insulated From Danger of Not Making Peace

GETTY IMAGES
Life’s a Beach: With the sun and cafes, It can be easy to forget about the occupation and conflict in Israel. That’s not necessarily a good thing.

The best place to forget the Israeli-Palestinian conflict is Israel. In American Jewish circles, we talk about it all the time. But enjoying a café hafuch in southern Jerusalem’s Anglo-populated neighborhoods such as the German Colony or Katamon, it feels a world away. Ironic, isn’t it — since from those cafes, the conflict is actually about 5 miles away, embodied in a separation barrier and a serpentine assemblage of settlements.

Ironic, but also predictable. The effectiveness of the barrier is twofold: It has stopped terrorist attacks, and it also has made it possible to live in (West) Jerusalem or in Tel Aviv and pretend that the Occupation doesn’t exist.
Unfortunately, this is a delusion — a bubble — with severe consequences. South Jerusalem, after all, is home not just to the German Colony’s liberals, but also to the neocons at the Shalem Center, now Shalem College, who for decades have peddled the idea that there is no hope for peace with the Palestinians, and (in the words of Daniel Gordis, one of Shalem’s most articulate spokesmen) we should settle in for 100 years of occupation. Regrettable, Rabbi Gordis says, but inevitable.
This is a self-fulfilling prophecy, of course. Claim that there’s no Palestinian partner, undermine those Palestinians who are, and lo and behold, soon there will be no Palestinian partner. If you will it, the 100-year war will be no dream.
But the real delusion is deeper still: that somehow, the rest of the world will sit idly by and allow this situation to worsen, year after year, decade after decade, without finally turning on Israel. In the bubble of southern Jerusalem, Israel is a complex but miraculous place where kids can play in the street, the Jews have a home and bus drivers read Shakespeare. The matzav, the “situation” with the Palestinians, is an unfortunate side-note to an otherwise complicated, fascinating, problematic, multi-faceted, beautiful, tragic enterprise in Jewish self-determination.
Outside the bubble, however, the Palestinian “situation” is not a side-note but the primary tune. It’s everything else about Israel that is merely secondary. To most of the world, Israel is defining itself by the Occupation, and all the rest is commentary.
This is why talking about anything else — Israel’s technology leadership, its record on gay rights, its ballet companies, anything — is seen as propaganda. To those of us who have lived in Israel, all of these aspects are part of a big, complex totality. But to most people in the world, they are a distraction, and perhaps a deliberate one, from the Occupation.
Only inside the bubble could one imagine that this situation is sustainable. Gordis and his colleagues maintain that it will take a century for the situation to change — and his allies in the Likud are ensuring that this is the case.
But will the world really tolerate this for 100 years? Of course not!
http://forward.com/articles/181552/forgetting-the-mideast-conflict-is-easy-in-israel/?p=all#ixzz2bAhirMoF