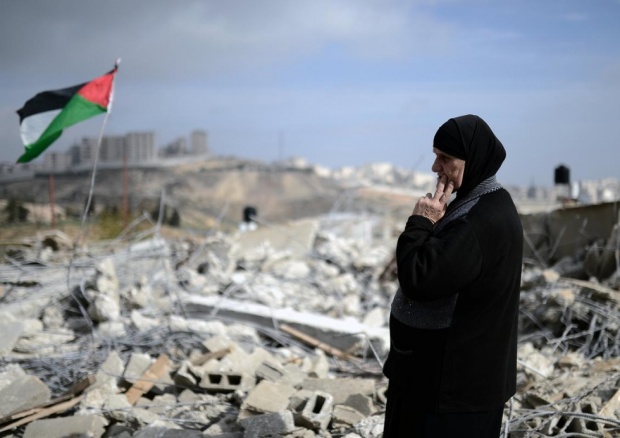 The Nakba: A crime watched, ignored and remembered
The steadfastness of the Palestinians likens to the age-old olive trees in Palestine who succeed in resurfacing between the European pines
MIDDLEEASTEYE.NET

The Nakba: A crime watched, ignored and remembered

The 15th of May is usually a trigger for a journey back in time. And for an unfathomable reason each such journey conjures up a different aspect of the Nakba. This year, more than anything else, I am preoccupied with the continued apathy and indifference of the Western political elite and media to the plight of the Palestinians. Even the horror of the Yarmuk camp did not associate in the minds of politicians and journalists alike the possible connection between saving the refugees there and their internationally recognised right of return to their homeland.

Israeli medical treatment of Islamists fighting the Assad regime, mending them and resending them to the battlefield is hailed as a humanitarian act by the Jewish state; its exceptional refusal, compared to all the other – and much poorer – neighbours of Syria to accept even one refugee from the Syrian mayhem has gone unnoticed.

It is this international exceptionalism and intentional blindness that throws me back to 1948 and to the period between June and October of that year. On 11 June, a truce was announced by the UN between the Zionist forces and the units of the Arab armies that entered Palestine on 15 May. The truce was needed for both sides to rearm, which benefited the Jewish side and disadvantaged the Arab side as Britain and France embargoed the arms shipments to the Arab states, while the Soviet Union and the Czech republic re-armed the Jewish forces.

By the end of that truce it transpired clearly that the all-Arab initiative to salvage Palestine was doomed to fail. The truce enabled UN observers to see for the first time, at close inspection, the reality on the ground in the wake of the organisation’s peace plan

What they saw was ethnic cleansing at high gear. The principal preoccupation of the new Israel at that moment was to utilise the truce to accelerate the de-Arabisation of Palestine. This began the moment the guns were silenced and was enacted in front of the eyes of the United Nations observers.

By that second week of June, urban Palestine was already lost and with it hundreds of the villages around the main towns were gone. Towns and villages alike were emptied by the Israeli forces. The people were driven out, many of them long before the Arab units entered Palestine, but the houses, shops, schools, mosques and hospitals were still there. What could not have escaped the UN observers is the sound of the tractors flattening these buildings and countryside landscape, now that there was no clatter of shooting around them.

What they heard and saw was adequately described as an “operation of cleansing” by the person appointed by the new regime of the land to oversee the whole operation, the head of the settlement division in the Jewish National Fund (JNF), Yosef Weitz. He duly reported to the leadership: “We have begun the operation of cleansing, removing the rubble and preparing the land for cultivation and settlement. Some of these [villages] will become parks.” He proudly scribbled in his diary his amazement of how unmoved he was by the sight of tractors destroying villages.

This was not an easy or a short operation. It continued also when the fighting resumed for ten days; at the end of the first truce, during a second truce and in the final stages of the war when the troops that came from Iraq, Syria and Egypt were retreating – wounded and defeated – back home. The “war” in the autumn of 1948 was prolonged because Palestinian villagers, volunteers from Lebanon and some Arab army units tried in vain to defend isolated Arab villages in the north and south of Palestine.

Thus, more villages came under the boot of the JNF and its tractors. The UN observers recorded quite methodically the dramatic transformation of Palestine from an Arab East Mediterranean countryside into a kaleidoscope of new Jewish colonies surrounded by European pine trees and huge water pipe system draining the hundreds of creeks that flew through the villages – erasing a panorama that can only be imagined today from several relatively untouched corners of the Galilee and the West Bank.

In the beginning of October 1948, the UN observers had had enough. They decided to write an accumulative report to their secretary general. It was summed up in the following way. The Israeli policy, they explained to their boss, was made of “uprooting Arabs from their native villages in Palestine by force or threat”. It recorded the process quite in full and was sent to all the heads of the Arab delegations in the UN. The observers and the Arab diplomats tried to convince the UN secretary general to publish the report but to no avail.

But the report featured once more. A unique American diplomat, Mark Ethrtidge, who was the US representative in the Palestine Conciliation Commission – the body appointed by the UN in resolution 194 from 11 December, 1948 to prepare a peace plan for post-Nakba Palestine – tried desperately to convince the world that some facts on the ground were still reversible and one of the means of stopping the transformation was repatriation of the refugees. When the PCC convened a peace conference in Lausanne in Switzerland in May 1949, he was the first American diplomat who pointed clearly to Israeli policy as the main obstacle to peace in Palestine. The Israeli leaders were arrogant, euphoric and unwilling to compromise or make peace, he told John Kimchi, the British journalist working at the time for the Tribune.

Ethridge did not give up easily on the issue of repatriation. He had some original ideas. He thought that if he could satisfy Israel’s territorial appetite it would enable some sort of normalisation in post-Mandatory Palestine. He therefore suggested that Israel would annex the Gaza Strip and cater for the refugees there, by allowing them to return to their homes in the villages and town of Palestine. Ben-Gurion liked the idea, as did most of his ministers. The Egyptian government was also in favour. One doubts whether Ben-Gurion would have allowed the refugees to stay in Gaza, but of course there is no telling.

Encouraged, Ethridge asserted that now his government could convince the Israelis to repatriate an additional significant number of refugees. Israel refused and the Americans denounced the “obstinacy” of the Israeli politicians and demanded that Israel would allow the return of many more Jews. The Americans decided to suspend the peace effort all together, unless Israel changed its mind; hard to believe today.

The Israeli Foreign Minister, Moshe Sharett, was worried about the American pressure that was accompanied by a threat of sanctions and suggested that Israel would accept 100,000 refugees (but would drop the Gaza proposal). What is remarkable in hindsight is that American diplomats such as McGhee regarded both numbers (250,000 refugees of Gaza and the 100,000 offered by Sharett) as insufficient. McGhee genuinely wished to see as many refugees return as possible since he believed the reality on the ground was still reversible.

The months went by and by the end of 1949, American pressure subsided. Jewish lobbying, the escalation of the cold war around the world and a UN focus on the fate of Jerusalem as a result of Israel’s defiance of its decisions to internationalise the city were probably the main reasons for this. It was only the Soviet Union that kept reminding the world through it ambassador to the UN and Israel through bilateral correspondence that the new reality Zionism created on the ground was still reversible. By the end of the year, Israel also retracted from its readiness to repatriate the 100,000 refugees.

Jewish settlements and European forests were hurriedly planted over the hundreds of villages in rural Palestine and the Israeli bulldozers demolished hundreds of Palestinian houses in the urban area to try and wipe out the Arab character of Palestine.

Israeli bohemians, yuppies and desperate newly arrived Jewish immigrants “saved” some of these houses, settled in them and their possession was approved in hindsight by the government. The beauty of houses and their location made them excellent real estate bonanzas; rich Israelis, international NGOS and legations favoured them as their new headquarters.

The daylight pillage that began in June 1948 moved the representatives of the international community but was ignored by those who sent them: be they editors of journals, captains of the UN or the heads of international organisations. The result was a clear international message to Israel that the ethnic cleansing of Palestine – as illegal immoral and inhuman as it was – would be tolerated.

The message was well received in Israel and immediately implemented. The land of the new state was declared exclusively Jewish, the Palestinians remaining in the land were put under military rule that denied them basic human and civil rights and plans to take those parts of Palestine not occupied in 1948 were put into motion. When they were occupied in 1967, the international message was already incorporated into the Zionist DNA of Israel: even if what you do is watched and recorded, what matters is how the powerful people in the world react to your crimes.

The only way to ensure that the pen of recording would be mightier than the sword of colonisation is to hope for a change in in the power balances in the West and in the world in general. The actions of civil societies, conscientious politicians and emerging new states have not yet changed that balance.

But one can take courage from the old olive trees in Palestine who succeed in resurfacing beneath and between the Europeans pine trees; and from the Palestinians who now populate exclusive Jewish towns built on the ruins of the villages in the Galilee; and the steadfastness of the people of  Gaza, Bilin and Araqib, and hope that this balance will one day change for the better.

– Ilan Pappe is Professor of History, Director of the European Centre for Palestine Studies and Co-Director for the Exeter Centre for Ethno-Political Studies at the University of Exeter.

The views expressed in this article belong to the author and do not necessarily reflect the editorial policy of Middle East Eye.

Photo: A woman looks on at the destruction resulting from Israel’s war, Operation Protective Edge in Gaza,  July-August 2014