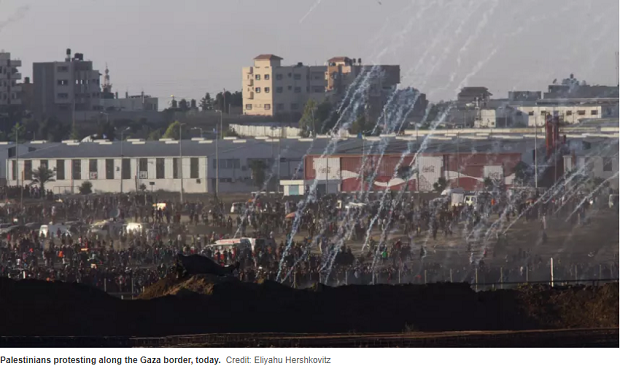 Two Palestinians, one of whom was a medic, were killed and 307 Palestinians were wounded in clashes near the Gaza-Israel border, Gaza’s Health Ministry reported Friday. 131 of the wounded were taken to local hospitals and 85 were said to be wounded from live fire. Five are currently in serious condition.

Thousands of protesters reportedly gathered in five locations along the border, where demonstrators threw firebombs and stones at IDF forces and set fire to tires, the military reported. IDF forces also identified a person attempting to cross the border and who immediately returned back.

Israel denied there was a cease-fire with Hamas. It now owes the public an explanation | Analysis | ‘Everyone is abusing us – Israel, Hamas, Abbas’: Latest round of violence finds Gazans exhausted

A number of Palestinians also threw a grenade at IDF forces in northern Gaza, the military said, though no casualties were reported. An IDF tank attacked a Hamas position in northern Gaza on two separate occasions, according to the IDF Spokesperson’s Unit.

The number of Palestinians killed in clashes at the border has risen to 159 since March when the weekly protests began, the health ministry said. The protests are part of the “March of Return,” weekly mass demonstrations for Palestinians’ right of return and opposition to policies, such as the U.S. embassy relocation to Jerusalem.

Hamas called on Palestinians to march along the Gaza border earlier Friday. “The Palestinian people have stamina, and will continue the resistance with every means until achieving independence and freedom,” said Hamas spokesman Hazem Kassem in response to Thursday’s Israeli airstrikes on Gaza, adding that Israel has repeatedly failed to break their spirits. The committee in charge of the procession began calling on Gazans to join in protests before a cease-fire had been declared on Thursday.

In a statement released Friday, the European Union reiterated its support to reduce the tensions at the border, saying “the first priority now is for de-escalation and for civilians’ lives not to be put at further risk.”

Hamas plans to dispatch a flotilla of about 40 boats to northern Gaza on Saturday morning, according to a statement released by a national group for breaking the siege on Gaza. The announcement was made on various social networks Friday night.

The statement said that the boats would not carry any equipment which could pose a threat or be used as weapons. According to Palestinians, the flotilla’s purpose is to raise awareness on lifting Gaza’s sea blockade. This is not the first time Palestinians attempt to carry out a flotilla led by Hamas.

An Egyptian source told Haaretz Thursday night that a cease-fire deal had been reached between Israel and Hamas. A senior Israeli source denied the reports.

According to Israeli assessments, Hamas wants to end the current round of violence following the damage and casualties caused by the military’s attacks on the Strip. An Israeli official told Haaretz that while Hamas had been seeking a cease-fire agreement through intermediaries since Thursday morning, Israel continued to attack high-profile targets.

According to Al-Jazeera, the deal would take effect immediately. Following the deal, the military announced it would lift restrictions on Gaza border communities.

Since Wednesday night, Israel struck 150 targets in Gaza in retaliation to some 200 rockets fired from the Strip at Israel. Over 30 rockets were intercepted by the Iron Dome missile defense system. Several exploded inside Israel, including in the southern city of Be’er Sheva, located some 40 kilometers from the Strip. This was the first time rockets were fired at the city since the 2014 Gaza war. A woman in Israel was seriously wounded while two others suffered light injuries.

Gaza’s Health Ministry reported that three Palestinians were killed by the Israeli attacks, including a pregnant woman, 23, her 18-month-old toddler and a man, who was identified as 30-year-old Ali Alrandur. He is the son of one of the commanders of Hamas’ armed wing, Iz al-Din al-Qassam. Six other people were wounded by the strikes. 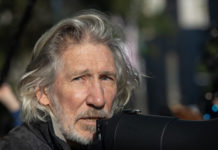