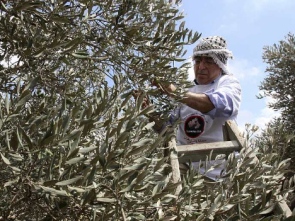 2On the wrong side of the wall
JERUSALEM (IRIN)  20 Apr — The one-room school building in the Palestinian village of An Nabi Samwil, near Jerusalem, serves as a classroom for eight pupils, a staff room, storeroom and the principal’s office. During the winter months or on hot summer days, it is also the children’s playground … The school serves 30 families in the picturesque village, which has panoramic views of Jerusalem and the West Bank. But a major problem for residents is that it is a struggle to reach either, as the village – along with 15 others – lies on the Jerusalem side of Israel’s “Separation Wall”.
http://www.irinnews.org/report.aspx?ReportId=92530

2Haaretz editorial: Illegal theft of olive trees must be stopped

20 Apr — The immoral wealthy have a new and tasteless toy: ancient olive trees adorning the gardens of their villas. According to an investigative report by journalist Maya Zinshtein published in the Haaretz Hebrew edition on Monday, for around a decade now, illegal trade in ancient olive trees – including uprooting, stealing and smuggling them from the West Bank into Israel – has been flourishing … The Haaretz report uncovered suspicions of criminal activities in this regard, along with an ugly greediness for pet trees that has nothing to do with the love of the land and its arboreal species.
http://www.haaretz.com/print-edition/opinion/illegal-theft-of-olive-trees-must-be-stopped-1.356834

HEBRON (Ma’an) — Villagers in the southern West Bank governorate of Yatta said they feared the imminent demolition of their homes and animal sheds Wednesday, as a demolition order handed out by Israeli forces the week before came into effect … A dozen tents and animal shelters were listed as illegal by the orders. The majority of buildings set for demolition belong to the families of Mahmoud Abu Taha, Muhammad Abu Taha and Ibrahim Al-Da‘ajneh, the residents said. The demolitions come as UN officials warned of a doubling of home and building demolitions carried out by Israeli forces since the beginning of 2011.
http://www.maannews.net/eng/ViewDetails.aspx?ID=380583

JVS 19 Apr — A new animal shelter has been erected in the Bedouin community at Khirbet Samra, with help from Jordan Valley Solidarity volunteers. Sheep and goats owned by local families have been sleeping outside, or even within homes, since three animal shelters were demolished by the Israeli Occupational Force on 7th April … In an act of resistance against attempts by the occupational forces to destroy their livelihoods, the Khirbet Samra community erected their new shelter from coffee sacks, wooden poles and sheets of metal.
http://www.jordanvalleysolidarity.org/index.php?option=com_content&view=article&id=234:new-shelter-in-khirbet-samra&catid=14:2009&Itemid=21

Settlers attack villager in Burin
ISM 20 Apr — On Tuesday 19 April in Burin a small village in the West Bank of Palestine, Aby Rusli-Eid, 36 year old Palestinian was savagely attacked by an armed gang of Israeli settlers from the nearby illegal settlement of Arusi. Aby Rusli-Eid is a policeman for the Palestinian Authority in the West Bank and was attacked at around 6 pm. His house is the closest in the village to the illegal settlement. Aby Rusli-Eid was sat in the living room with his wife and his five children when he heard loud shouting from outside the house, he went outside sure in the knowledge that there were armed settlers nearby but bravely choosing to keep the violence as far away from his home and his family as he could, he closed the door behind him to try and protect them. There were around 20 heavily armed settlers outside, carrying both semi automatic rifles and handguns. Aby was shot twice almost immediately, once in the arm and once in the stomach. He is currently stable and recovering in hospital but whether he will regain the mobility of all of the fingers on his right hand is currently unsure.http://palsolidarity.org/2011/04/17873/ 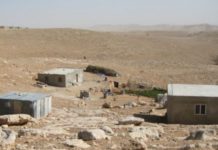 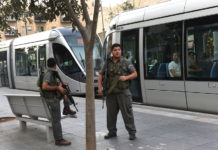 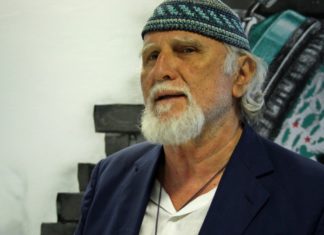