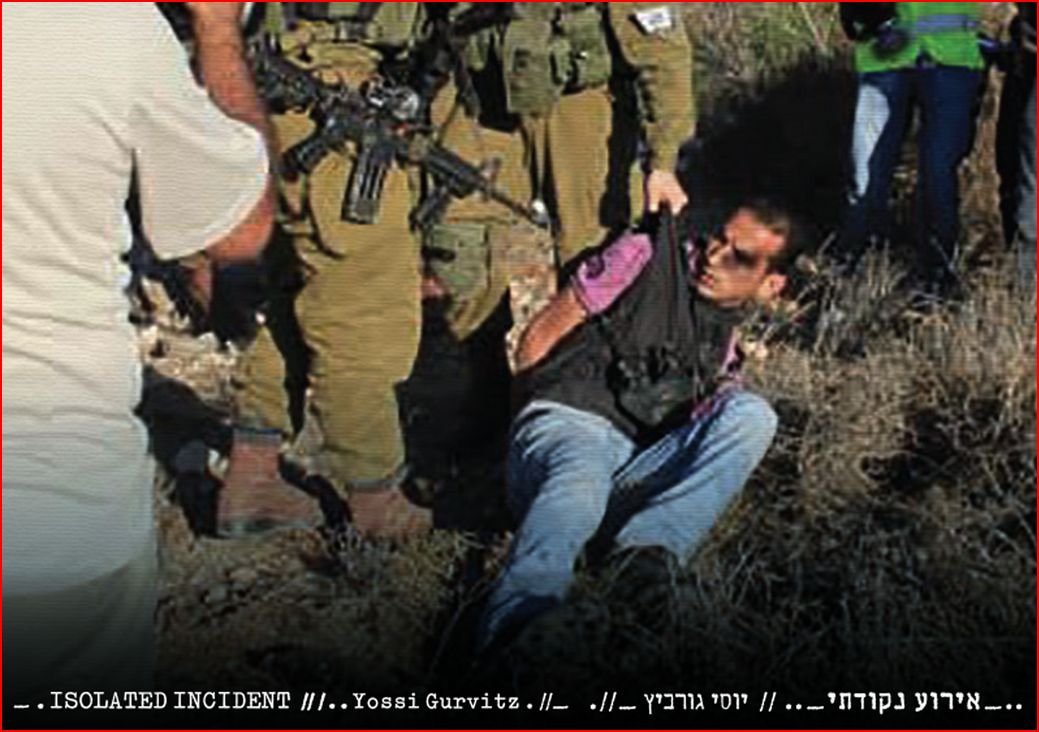 IDF on Bil’in: spins, half-truths and lies
‘How speaking out about the occupation nearly landed me in jail’
Why soldiers don’t ‘break the silence’ to the IDF  Written by Yossi Gurvitz in his capacity as a blogger for Yesh Din – Volunteers for Human Rights. A version of this post was first published on Yesh Din’s blog.

The lies and the decline

Photo: The arrest of B near his village, Krayut.

Sometime, quite a long time ago, the IDF would proudly claim that its troops reported the truth, and that this was the secret of its success. Officers boasted that unlike their rivals in the Arab armies, they knew precisely what their troops were doing. A seminal book which came right after the Yom Kippur War (whose anniversary was noted recently), “Ha’Mekhdal” (“The Scandalous Neglect”) claimed that when the war began, the tables turned: Arab officers reported the truth and Israeli officers reported deceptions. Only when the situation on the frontlines changed, did the Arab officers begin to whitewash their reports. The war ended accordingly.

Naturally, this is a very prettified picture of reality. IDF officers – the most famous, perhaps, being Ariel Sharon, of whom Ben Gurion wrote that he “does not abstain from telling untruths” – knew perfectly well how to lie to their superiors. Former President of the Supreme Court, Aharon Barak, gathered courage, after his retirement, to say that the security apparatuses had a habit of “waxing,” i.e. lying to, the court (Hebrew). Needless to say, not a single officer who lied to Barak’s court was ever indicted for perjury. Which is a pity: perhaps they would have learned their lesson, perhaps they would abstain from telling untruths, or at least limit their usage thereof.

All this introduction intends to bring us to the case of B. He is a resident of the small village of Qaryut. Some of the village’s lands were stolen after the creation of the outpost of Adei Ad, which we documented extensively, as well as by other settlements in the region. B. serves as the village’s social media coordinator: he is a photographer, and he mainains contacts with NGOs. In the beginning of September, a nonviolent demonstration was held in the village, protesting the blocking of the village’s southern exit. It was blocked by the army at the beginning of the second Intifada; which means that the villages have to travel some 18 kilometers to reach the center of the village, instead of just two. B. told us that he believes the reason for the blockades has little to do with security, but rather with causing the villagers to despair from the difficulty of maintaining their lands and abandon them, which will allow settlers to take them over.  Evidence shows he is right.

According to B., the demonstration was peaceful, which did not deter the security forces, as usual, from using severe violence against the protesters. B. was the only detainee, and he was detained through the use violence. The soldiers kept beating him even after he was handcuffed. He was dragged into the jeep, where the soldiers carried on the torture by banging his head on the sides and the floor of the vehicle. From time to time, they slapped him. As they brought him off the jeep, they bashed his head on its door.

According to B.’s testimony, he was taken to a military outpost near Sinjil, nicknamed Ha’Karon (the railroad car). Then began the procedure known to every soldier who has served in the territories, though rarely mentioned: B. was seated, tied and blindfolded, and many of the soldiers passing by kicked him or beat him. Later on, they began beating him with batons, until, according to him, he lost consciousness. Then they threw water on him and woke him up.

At this point, the soldiers allowed B. to see a doctor. The female physician who was present asked him where it hurts and why he was covered in blood. B. said this was a result of the torture. Soldiers who were present burst out laughing, and the doctor joined them. According to B., not only did she and her colleague refrain from treating him, they also knowingly falsified the medical report: “Every time I said ‘yes’ they marked ‘no.’”

From here, B. was taken for another round of abuse, again while bound and blindfolded. The soldiers took him, very late at night, to the Binyamin Police Station, where the police refused to take him and told the soldiers to return in the morning. This was too much bother for the soldiers, so they took him to a nearby road, tossed him out of the vehicle, beat him again, and abandoned him – bound and blindfolded – on the road, and drove off. B. managed to make it home safely.

None of this is new. This happens on almost a daily basis in the West Bank. It is well known to anyone who served there, though the practice is to lie about it. Which is the point of this post.

In the movie “The Battle for Algiers,” a French officer is asked whether he received the intelligence about a ticking bomb by use of torture. Of course, he pleasantly tells the journalists; seeing their shocked faces, he asks “how do you think we get intelligence?”

But we are not in a movie, and in reality everyone lies. The torture of detainees is not something you can talk about. It is indefensible and the person who kicks a bound man is, and with justification, considered to be the scum of the earth.

Therefore, the soldier lies to his officer when he says he acted correctly with the detainee. And the officer knows he is being lied to. Officers in return report untruths to their superiors. Military doctors falsify their reports. The interrogator lies to the prosecutor, who in turn lies to the בourt, who turns a blind eye, as opening its eyes is beyond its power. The gun-cleaning fabric which covers the eyes of the prisoners also covers the eyes of the court. In an unforgettable scene in “The Law in These parts” a military judge openly says that he knew detainees were tortured, even though the system denied knowledge of it. That’s the moment when the walls of lies was breached – lies without which you cannot run an occupation. Lies which are not limited to torture during interrogation, but also include the common daily forms of torture intended to punish and deter.

And lies fester. People who have grown accustomed to lying to their commanders about “minor issues”, as the army sees them, such as the abuse of a helpless human being, will learn to lie about other issues as well. They will lie, out of laziness, about their true readiness for a mission. They will learn that the fact that they lied and that the officers willingly accepted those lies gives them power over their commander: If you turn me over for this infraction, I’ll open my mouth about what we did in Qaryut, or Sinjil, or hundreds of other places.

This is the plain meaning of the phrase “the occupation corrupts” – and we have yet to say a word about civil society, which later has to take back the boys it has turned into abusive goons, and which prefers to pretend that nothing happened to them and anyway, if anything did happen, it’s not its fault. The question of who is the bigger, more destructive liar – the soldier who lies to his commander or Israeli society lying to itself – is outside the scope of this blog, but it’s worth pondering.

On the one hand, you can argue these lies attest to a certain modicum of morality: An honest person who cannot look his actions in the eye. On the other hand, this aspect of his torturers’ morality probably does not help B. all that much. 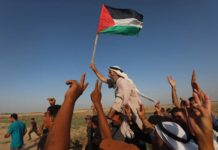 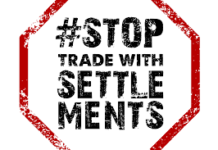